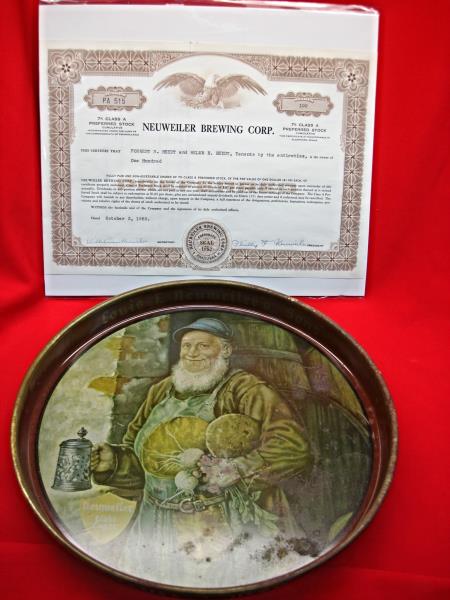 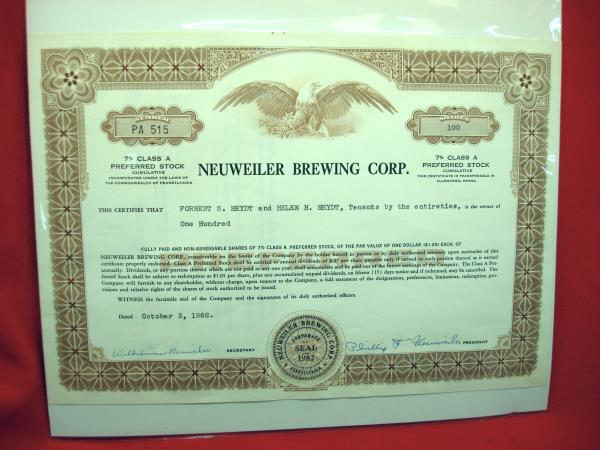 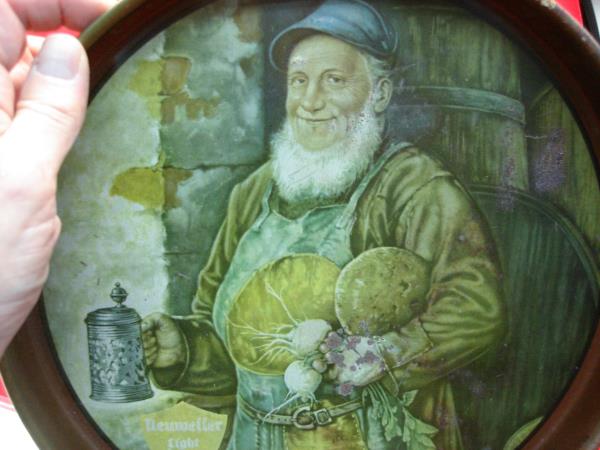 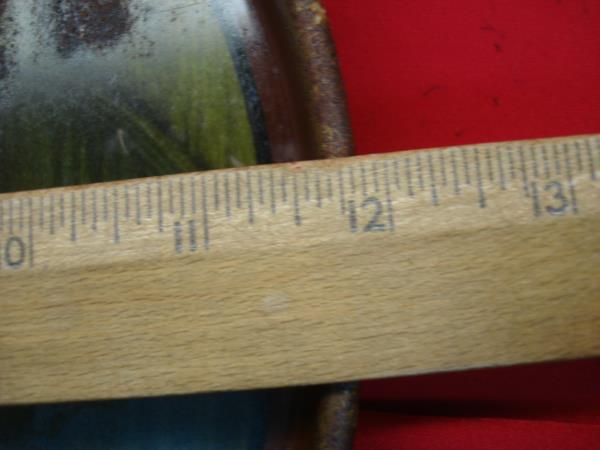 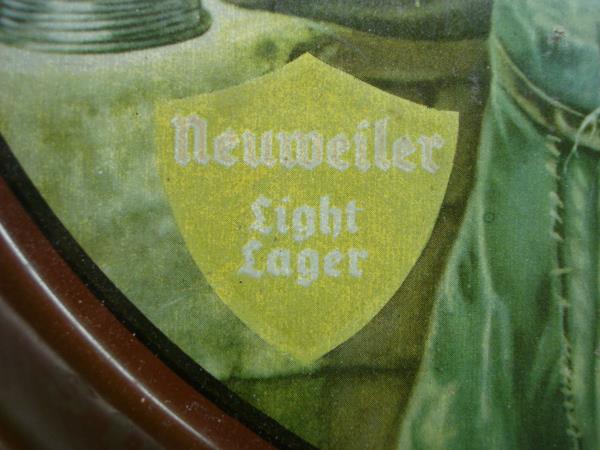 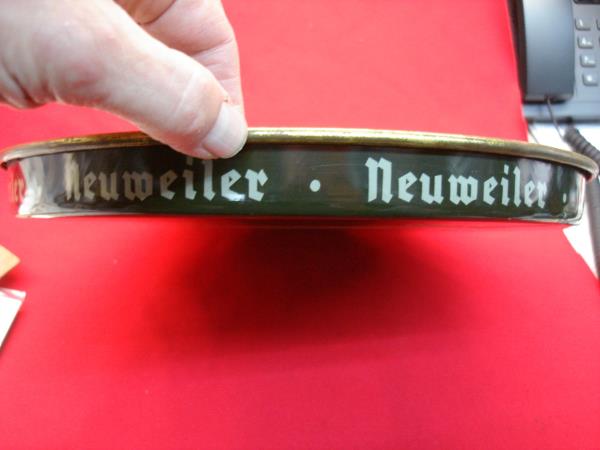 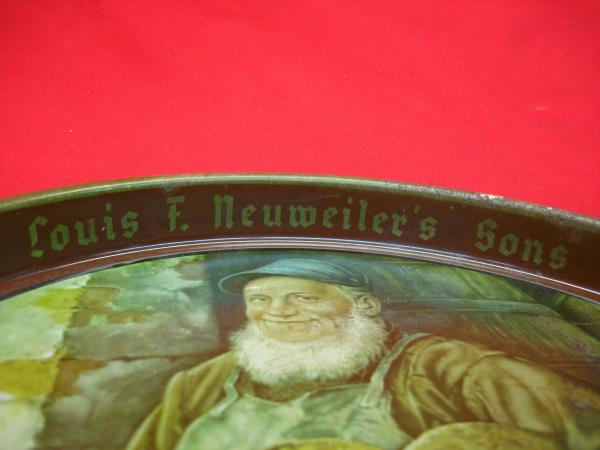 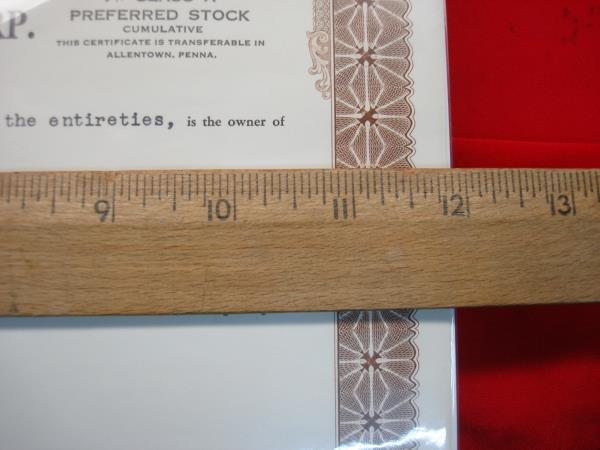 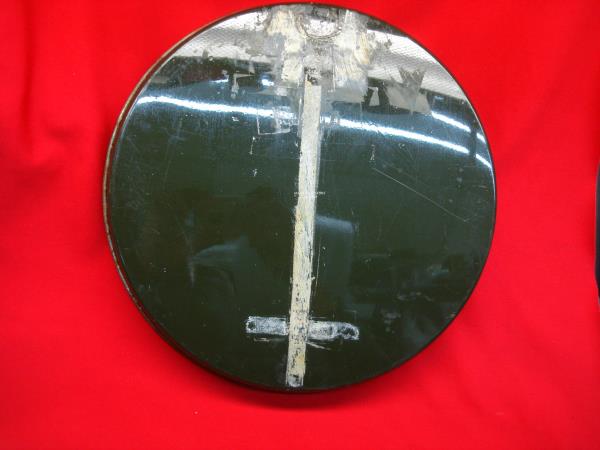 *********NEUWEILER BREWING CORP.ALLENTOWN, PASTOCK CERTIFICATE100 SHARES – PREFERRED STOCK+LOUIS F. NEUWEILER’S SONS TRAY……………………………. Allentown brewery cert with an eagle vignette printed in brown.  Issued and not cancelled, dated 1962.  Neuweiler Brewery, is a historic brewery complex located at Allentown, Lehigh County, Pennsylvania. The complex was built between 1911 and 1913, and consists of the office building, brew house, stock house, pump house, wash house, chemistry lab building, boiler room, bottling house, garage, fermenting cellar, and smokestack with the name “Neuweiler” on it.The brewery closed in 1968Neuweiler Brewery was founded by Louis Neuweiler, who bought out longtime local brewer Benedict Nuding in 1900. Nuding’s operation was limited by its location, and in 1911 Neuweiler and his son, Charles, eager to expand, hired Philadelphia architects Peukert and Wunder to build a new complex some distance away, at Front and Gordon streets.The brewery, featuring its own generators for electric power, opened in 1913. By 1932, the brewery buildings and the warehouse building were joined as one structure, and the former machine warehouse became an independent electric plant with an ammonia tank and ice machine. A pump warehouse had been added onto the northwest corner of the former stock warehouse, and a two-story bottling plant with a basement was located to the north of the other buildings.Neuweiler produced several brands of beer:  Light Lager, Cream Ale, Stock Ale, Premium Ale, Bock (seasonal), Half & Half, Porter, Stout and Hochberg. Most were available in the 12 oz. “Steinies” or Export bottles, quarts, cans or kegs. When in full operation, Neuweiler’s was one of Allentown’s largest employers.By 1950, the bottling plant was extended to the corner of North Front Street and Liberty Street, the stock warehouse was extended toward North Front Street, and a tile ash hopper was located behind the boiler house. Brewery operations ceased in 1968 due to competition from national breweries.However, the Neuweiler recipes and brand names were purchased by the Ortlieb Brewery of Philadelphia, who also purchased the Fuhrmann and Schmidt (Shamokin) breweries in 1966. After the brewery’s closure, the F&S Brewery produced several of the Neuweiler beers (Porter, Light Lager and Cream Ale) from around 1970 until closing in 1975. After F&S closed, the Ortlieb brewery continued Neuweiler Cream Ale at the Philadelphia plant until the late 1970s.CERTIFICATE IS IN PRISTINE CONDITION.  THE TRAY SHOWS USAGE AND HAS SOME TAPE ADHESIVE ON THE BACK, OBVIOUSLY FROM BEING DISPLAYED AT SOME TIME.  BE SURE TO CHECK OUT THE PHOTOS. PLEASE NOTE : OUR PRICES ARE FIRM. THEY ARE THE LOWEST WE CAN SELL IT FOR. WE DO NOT ACCEPT OFFERS.IF YOU OFFER..YOU WILL BE BLOCKED